Is beauty important for people’s wellbeing in cities?

“Furthermore, local economic conditions, as measured by the cost of living, and the perceived beauty of the city are associated with the happiness.” (Leyden et al., 2011, p. 882)

“The main findings confirm the hypothesis: beauty and aesthetics are among the most important factors in perceived community satisfaction. The findings for beauty and aesthetics lend support to those by GLAESER et al. (2001) and CARLINO and SAIZ (2008), among others, who highlight the importance of ame- nities in urban and regional development.” (Florida et al., 2011, p. 43)

“We find that inhabitants of more scenic environments report better health, across urban, suburban and rural areas. This result holds even when taking core socioeconomic indicators of deprivation, such as income, and data on air pollution into account. Importantly, we find that differences in reports of health can be better explained by the scenicness of the local environment than by measurements of greenspace.” (Seresinhe et al., 2015, p.6)

“Society ignores new results in applied science that might dispute standard typologies shaping the built environment, used without controversy over the past century. In addition, many practitioners in architecture and design simply continue what was set by the modernist revolution (one century ago), never questioning whether it was all such a great idea. Will people now pay attention to the visual information embedded in the environment? [97]

“For this reason, architectural culture today is not reacting to the alarming converging lines of evidence pointing to the deleterious effects of these practices on child development. Contemporary architectural discourse is apparently uninterested in this question.

“This essay accuses the architecture profession of not paying sufficient attention to human psychological health, including children’s development. Recent studies of infants born during the COVID-19 lockdown raise alarming questions about the possibility of lowered cognitive development, for whatever reason. Various arguments were collected here to point the finger at the lack of requisite visual complexity in “fashionable” industrial- minimalist interiors. Will we see a generation of children with intellectual impairments? Nobody really knows. Can the medical profession and society as a whole ignore this frightening possibility and do nothing about it?” (Lavdas & Salingaros, 2021, p. 8)

“The world has erected vast amounts of urban fabric that fail to generate or sustain happiness: possibly because it was not clear what happiness is or why humans need happiness as a basic component of their lives. For millennia, a society’s wealth was invested in creating a healing environment, but after World War II, money was used to build an ugly world that achieves the opposite (Buras, 2020; Curl, 2018; Life, 2020; Millais, 2009; Rennix & Robinson, 2017; Robinson, 2021; Salingaros, 2020b; 2021). One of the monumental tasks facing civilization today is reconstructing the world’s cities so that they provide happiness through their details and geometry.” (Salingaros, 2021, p. 24)

What do people find beautiful in streetscapes?

“The strongest spatial parameters affecting aesthetic judgments of urban spaces are symmetrical and uniform arrangement of the lateral spatial boundaries, preferably formed by vegetation or stylistically uniform building types. These characteristics correspond to the kind of properties of figure formation originally developed in Gestalt psychology and later adapted to three-dimensional architectural spaces by Weber (1995). In short, visual regularity is a primary factor in the judgment of beauty.” (Weber et al, 2008)

“ We have indeed found that tall residential buildings are negatively associated with beauty and happiness.” (Quercia et al., p. 953)

Where do people want to live?

“People want to live in suburbs and many are happy there.”

“Planners and urban theorists hate suburbs, and believe that Europeans have a preference for living in apartments. This is demonstrably wrong, according to a 2013 survey a clear majority of Europeans seemed to want a detached house as a ‘dream home’.”

“There are strong correlations between living in green environments and overall better mental health. High level of urbanization is associated with increased risk of psychosis and depression, as well as hospital admissions, divorce, death rates.”

Links to polls and studies showing popular support for traditional and classical architecture and urbanism versus modern environments can be found here:

“Empirical work has confirmed the popular suspicion that the aesthetic tastes of architects differ markedly from those of the general population. … Subjects were shown photographs of unfamiliar people and buildings (with varying frequencies) and were asked to rate each in terms of attractiveness. One of the findings of this research was that although correlation between the architects’ and non-architects’ ratings of the attractiveness of people was extremely high, the correlation between their ratings of the attractiveness of buildings was low and non-significant.”

A great article on this topic can be found here:

“The hedonic price model that has been estimated shows a significant price premium of 15% for pure neo-traditional styles and 5% for referring to traditional styles. Various robustness checks confirm that these results are partly, but not entirely, driven by, e.g., unobserved differences in quality between houses with different building styles.”

“The estimated design value is large. Our baseline estimate suggests a capitalisation effect of about 6.6% of property value (£16k in 2003 prices) associated with a one standard deviation increase in our preferred index of distinctive design. Being in an area that is reported as distinctive as opposed to being in a neither distinctive nor non-distinctive area increases property value by as much as 18.6%. The effect seems at least partially attributable to an architectural externality. Our results, thus, provide some rationale for planning policies that seek to preserve and enhance the architectural quality of the built environment to internalise architectural externalities.”

“The results clearly demonstrate that premium prices are indeed associated with the older architectural quality styles like colonial, federal, garrison, and Victorian.”

“We found that certain types of cultural heritage site (namely, historic buildings, memorials, and Martello towers) provide positive spillovers to properties nearby, while archaeological sites and (depending on the function form) churches are negatively associate with property values. We interpret these premiums (or lack thereof) as capturing aesthetic value.”

“In this spatial model, listed built heritage turns out to gain a premium over nonlisted heritage of 29.6 % while surrounding houses are worth an extra 0.28 % for each additional listed building within a 50-m radius; houses sold within a conservation area gain a premium of 27.9 %. This indicates that there exists a strong historic ensemble effect and that listed heritage is more highly valued when it is clustered within an ensemble with historic ambience.”

“Conservation areas in Lisbon generate positive benefits for both dwellings inside and, importantly, have significant and robust positive spillover effects into nearby areas. It is also interesting to note that conservation areas are valued in their diversity. Those with more ecological amenities or closer to concentrations of built heritage yield compounding premiums for simply living in these areas of the city.”

What leads to healthy cities?

“It is a remarkable finding that the Boerhaavebuurt, a neighborhood whose design paid little or no attention to the impact of the living environment on health, emerges as the most exercise-friendly. This, while in Osdorp – as one of the western garden cities where the design explicitly paid attention to light, air and space that should stimulate outdoor exercise – there is actually less exercise. In addition to a lot of public green space, these neighborhoods are also characterized by a lot of public traffic space, which, with increased car ownership, can easily be used as ample parking.” (Den Hertog et al., 2006, p.131)

“The results of the study indicate that the classic urban neighborhood with and reasonable to high housing density (≥ 50 dwellings/ha) has good potential to function as an exercise-friendly neighborhood. A positive element in this is especially the potential for function mixing (working/shopping and living) in which, in addition to large supermarkets, there is also plats for small-scale shopping facilities more spread throughout the wik. It is therefore important to create (architectural) conditions in which also small-scale neighborhood functions and can get a place in the neighborhood.” (Den Hertog et al., 2006, p. 133) 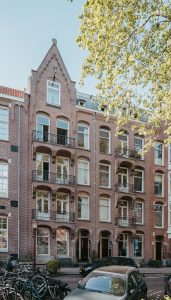 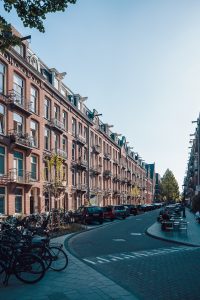 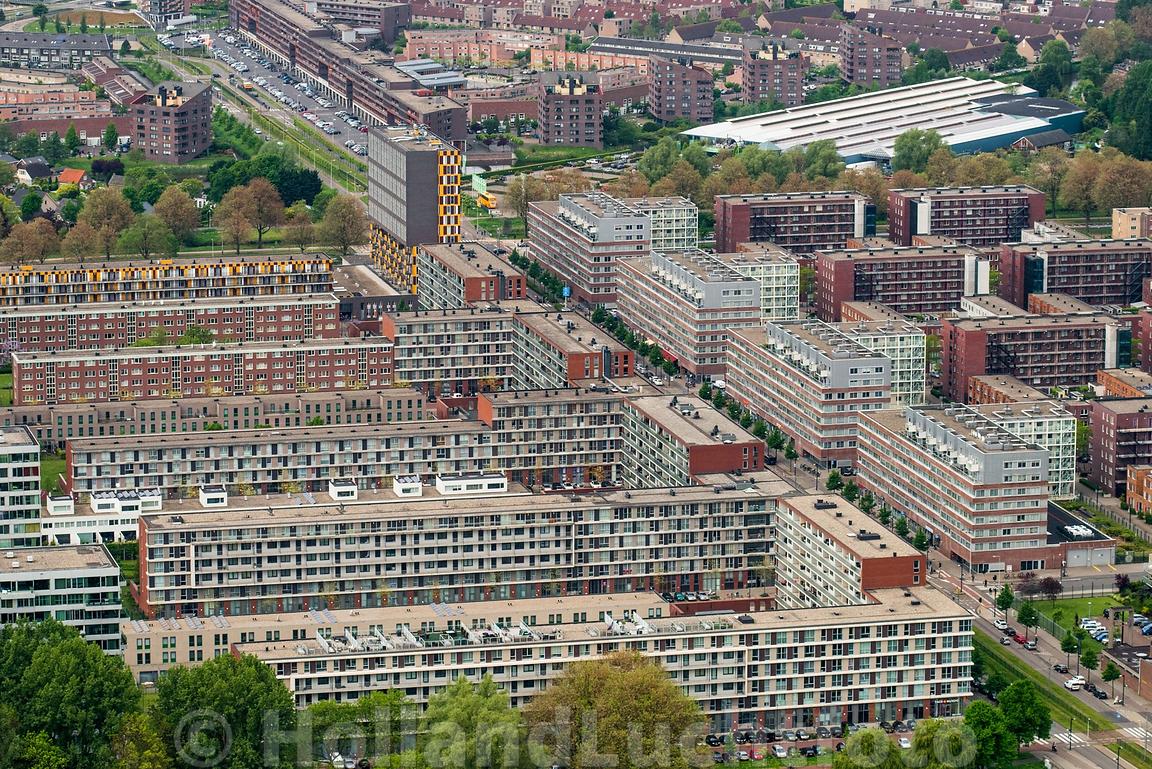 “To realistically increase the level of walking and biking, it will be essential to reintroduce development practices that make it easier to engage in such activities during the course of one’s daily activities. This may mean not only the introduction of the types of urban design features advocated by neotraditionalists into developments located at a region’s periphery but also the retrofitting of existing urban areas.” (Frank & Engelke, 2001, p. 215)

I want to thank George Kerpestein for his excellent entry at his blog pointing to valuable research: https://casualrealism.substack.com/p/architecture-and-evolution-viii-the?fbclid=IwAR3FMmsHPj4AifzB5_Ho8SmsWI1eJasVt9JKH5vdKCckL3wdsAMZiScY6Y0